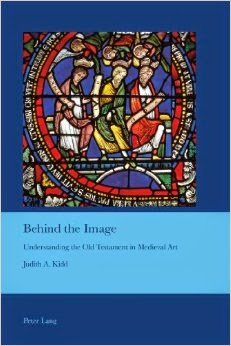 My sister-in-law, Judy, chose not to have children, but instead to dedicate her life to teaching theology in a girls' school, preparing her students for further study at university. Many of them credited her with their successful applications to Oxford and Cambridge.

Once she had retired, she told us about her new plans. For some time, she had longed to write a book about Jewish influence on the use of colour in medieval iconography. Unfortunately, after looking into it, she decided that there wasn't any! Her research, however, led her to explore western medieval art that included scenes and characters from the Old Testament and this became the basis for the book she really wanted to write.

It became a ten year labour of love and involved countless trips to ancient churches, where she studied and photographed the stained-glass windows and carvings. She drove thousands of miles across England and France, usually alone, totally absorbed in her task and refusing to buy herself lunch unless she could find something half-price.

She wrote and rewrote her chapters at the same time that I was embarking on my stories. Writing aside, our interests could not have been more diverse. She tended to read only non-fiction and disliked both television drama and theatre, calling it 'a lot of silly people dressing up.' As you can tell, she spoke her mind! She refused to have the internet installed and her old, red telephone came out of the ark. She had never bought a women's magazine, always lived frugally and had absolutely no interest in material things. Her life was dedicated to teaching and, finally, to her beautiful book.

In fact, Judy was well-known for her parsimony - when our eldest daughter was two years old, her present from Judy was a one thousand piece jigsaw of Tewkesbury High Street. It was so ancient that, parked in the front of the picture, was an Austin Allegro.

Some of my Woman's Weekly stories have contained flashes of her eccentric ways - a woman with a chain-saw permanently lying on her sofa ('well, there's nowhere else to keep it') and, while being serenaded by a suitor with a clarinet in her front garden, an embarrassed young girl fervently willing the wind to blow away his sheet-music - which it did, draping the pages neatly over the neighbour's box-hedge.

When we talked about writing, we really connected, sharing our highs and lows, especially the patience required when seeking publication and the subsequent joy of acceptance. When we visited her one winter Saturday during the time I took part in the live online flash-fiction contest, Write-Invite, she insisted on taking my husband and daughters out for an ice-cold walk at half-past five so that I could write my story in absolute peace and quiet. My husband accessed the internet by tethering my laptop to his phone and I sat in her dark, chilly kitchen (she didn't turn on lights until strictly necessary and there was virtually no heating) and typed in fingerless gloves and a bobble hat. No one could have been more delighted than Judy when I told her the following Saturday that my piece had won.

As you can imagine, Judy and I were equally thrilled for each other when we received our publishing contracts. This was the culmination of our dreams. Very different tomes, just about as different as you could imagine - neither of us were likely to actually read each other's books - but our joy was completely mutual!

While she worked on her footnotes, index and requests for permission to include certain photographs, Judy began to suffer great pain in her back and lost the use of one arm. Typically, she persevered for as long as possible before a close friend insisted she see a doctor. The diagnosis was as bad as it could possibly be. The back-ache was bone cancer. The poorly arm was actually broken.

Great friends rallied round to help finish the indexing and final proofreading. With Judy so ill on the day the book was released, one very dear friend drove like a bat out of hell to the publisher's office and collected her personal copies. At last, frail though she was, Judy could hold her book in her hands. It would be impossible to forget how she looked that day. Fragile, but utterly fulfilled.

The book made a huge difference, as books often do. She rallied for a few more months and suffered surprisingly little pain. But the illness took its toll. During her final days in August, my husband and I sat by her bed in the hospice, wishing there were any words of comfort we could say, knowing there were none. Even after she died, I could only say goodbye. I was no longer a linguist or a writer. The words simply did not exist. But her book lay between us on the bed and that said enough.

I try to overlay that final memory with one of the day last Christmas that Judy presented us with a copy of the book. She had included us in the acknowledgements; my husband for all his technical support once she finally got round to buying herself a laptop (still refusing internet, though) and me for translating a little piece of old German for one of the chapters. She was a linguist too and could have translated it herself, so I am certain she just wanted to make me a part of it, and I'm so grateful.

I miss storing up the wealth of material she inadvertently gave me for stories, safe in the knowledge she would never recognise herself, because she would never read them! I miss her gooseberry crumble, her amazing pastry, her elegant turn of phase and her laughter. I miss her genuine interest in us as a family, her endless quest to track down a herbal remedy for our daughter's migraines and her enthusiasm for hearing the latest writing news. I wish she could have held my books in her hands.

In the year since Judy's book, Behind The Image, was published, it has sold to universities, libraries and museums throughout the world, including Harvard and the Metropolitan Museum of Art in New York. Thankfully, she lived long enough to know about the success of her legacy.

Since August, I try to banish trivial aggravations and worries by remembering some of Judy's final words of wisdom. During those last days, a friend asked her if she was frightened. Judy replied, "No. Just a bit annoyed."
Posted by Joanna at 00:04 14 comments: