Elvis and The Cold War 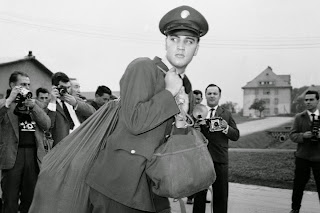 In 1958, Elvis went to West Germany, but not to rotate his famous pelvis. He was drafted to a tank division that would help prevent the Soviets storming through from the east.

Khrushchev had given the Western powers six months to leave Berlin, but the US, UK and France stated their intention to stay exactly where they were. As a result, Soviet tanks were expected to emerge from the same East/West German mountain gap through which Hannibal and Napoleon had once invaded. Elvis's unit was sent to guard it. However, he - and many young men like him - could not fully comprehend why they were there at all.

They were justifiably mystified about their presence in West Germany, since it was likely that the Soviets were more concerned with spreading communism to countries that were easier targets and would eventually unite with them against America. Were the Russians really coming? As Elvis himself said, "What the hell are we doin' this for anyway?" 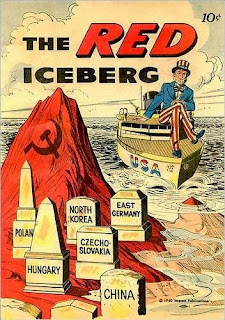 During this time, Elvis became a significant person in the forefront of the Cold War, because he was the epitome of freedom. West Germany, aware that his popularity could encourage young Germans to lend weight to NATO, took advantage of his presence, even running a competition for winners to take tea with him. East Germany, however, blustered at the moral decline he represented. Rock 'n roll was considered savage, a threat to ordered society and, according to defence minister, Willi Stoph, “a means of seduction to make the youth ripe for atomic war.” They had to find something to counter all that Elvis stood for and their response was -  the Lipsi.

The Lipsi - the name designed to offer a degree of 'modern' appeal - was a staid, old-fashioned dance strictly for couples, with the man leading the woman and not a pelvic thrust in sight. There was minimal bodily contact and both the steps and the hand movements seemed childlike and innocent. Its introduction - officially endorsed by the state - openly demonstrated the communist party leaders' distaste for men and women dancing solo and therefore able to make their own individual moves. The Twist, for example, was declared to be harmful to one's internal organs. Signs were put up in dance halls declaring that dancing apart was forbidden.

East German youth took to the streets in protest. Arrests and prison sentences followed. Among the evidence in court were pictures of Elvis found in the rebels' homes.

Khrushchev's ultimatum eventually came to a crescendo with the building of the Berlin Wall. Elvis had left Germany by then and the east was sealed against western decadence.

In Tying Down The Lion, we meet East Germans of the age between the younger and older generations. For them, weary from the horrors of World War II, the rebelliousness of youth has passed by, but the compliance of old age has not yet set in. It is therefore with a gentle touch of disdain and self-mockery that they teach the Lipsi to our English narrator, Jacqueline. Her knowledge of music is confined to television programmes such as The Black and White Minstrel Show, although she has seen Ready, Steady, Go!, in which the gyrating dancers met with her grandmother's shock and disapproval.

Perhaps, to the younger British teenager of the sixties, whose eyes sometimes had to be covered while they gazed at exciting new sights on the small screen - and to those who covered them - the Lipsi was representative of a tamer, more 'respectable' time. Whereas to those of the age to seek greater self-expression, it was stuffy, prim and repressive.

The final irony is that 'Elvis the Pelvis' had already outraged the establishment with his gyrations (he eventually had to be filmed from the waist up for television) and with his music that crossed racial divisions in just the same way as he disturbed the leaders of East Germany, and yet the US found it useful to parade him as a symbol of western culture during the Cold War - a perfect example of how the ideals and standards of different countries and regimes are not as diverse as they might at first appear. That said, the Lipsi was doomed never to catch on - anywhere. 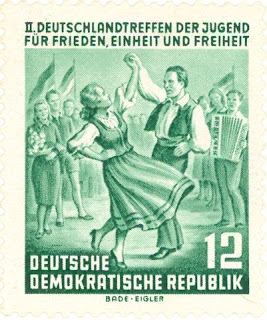