A week ago, I abandoned my novel-in-progress and the mist-shrouded Cotswolds to go to Waterstones Piccadilly for the London Short Story Prize announcement. The competition and the event were administered and arranged by the writer development agency, Spread The Word, who looked after everyone and made the whole experience a joy.

I had been amazed to see my story, Upshots, in the longlist, so when it had the great good fortune of reaching the shortlist of six, the surprise was wonderful. When Upshots was declared the winning story, I was completely overwhelmed by the news and by the generous feedback from the three judges.

I read an excerpt to the audience, which involved improvising a Yorkshire voice for Stan, my narrator. Acting the part took me right out of myself and helped overcome a few nerves. I was told by a proper Yorkshireman afterwards that I had managed to pull the accent off - yet another surprise because I was certain it came and went quite a bit.

Upshots will be included in an anthology from the competition, due to be published next year. This year's anthology, a beautiful book called Flamingo Land & other stories, was launched the same night and features last year's winning story by Ruby Cowling, and a story by my Twitter friend, Kate Willis. Ruby read an excerpt from her title story and it was truly mesmerising.

After the announcement, the next highlight of the evening - and what a highlight - was an Audience with Jon McGregor, who gave us a reading from his book-in-progress, and Kevin Barry, who read from his latest novel, Beatlebone, recently the winner of the 2015 Goldsmiths Prize .

And just to cap it all, on the way out of Waterstones, I spotted TDTL on the shelves. It was a big thrill to see it in Europe's largest book shop. I did replace it spine-out after the picture was taken, I promise. 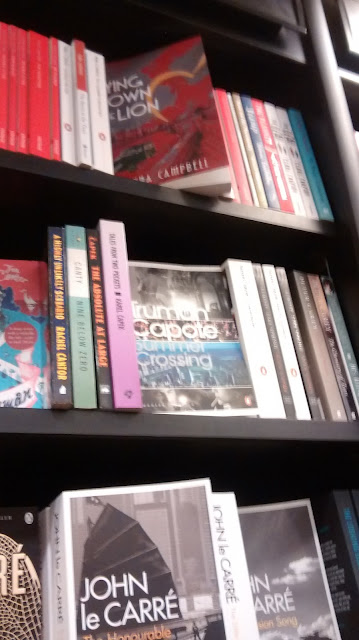 Hogging the Spotlight with LitPig

I am so grateful to LitPig for inviting me to post on  his brilliant blog today.

And thank you to terrific Tracy Fells, wonderful, talented writer and lit-friend.
Posted by Joanna at 01:25 2 comments: