I'm so thrilled to welcome to the blog hugely talented author, Shirley Golden.

Shirley is already well-established as a short story writer published in many anthologies and magazines and you will have frequently spotted her name in competition shortlists. Her poignant The Right Time To Fly was the 2013 winner of the Exeter Short Story Competition. Then last month, Urbane Publications released her debut novel, Skyjacked. 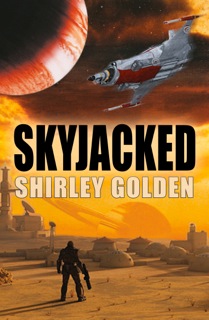 Set in 2154, Skyjacked launches the adventures of space pilot, Corvus Ranger, and blends high-tech space travel with the depth of human emotions, exploring the interactions between the well-drawn characters with the wisdom and carefully nuanced precision at which Shirley's writing always excels.

Today, Shirley is going to examine the use and development of artificial intelligence within fiction.

Over to you, Shirley! 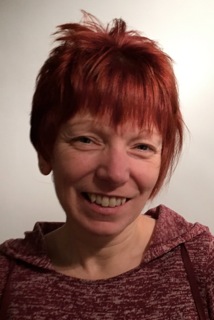 The first time I ever encountered AI in fiction was in the form of the on-board computer, Zen, in Blake’s 7. Zen is hostile (initially), evades questions, and insists on being called by its name. It is, in fact, thoroughly capricious, displaying many human traits. It is also, essentially a screen. But I was hooked on the idea.

It was a far cry from Blade Runner’s replicants, especially Rachael, who’s been given memories to mask the fact that she isn’t human, and displays an impressive emotional response to the Voigt-Kampff Test. It takes Deckard over one hundred questions to confirm that she isn’t human.  The film shifts away from the idea of machines as (mostly) benign assistants. The Robots in this story are scary, with obvious tones of, ‘creation kills creator’. But their scariness is justified. They want more life. They don’t want to be ‘retired’. And who can blame them? It’s a predicament to which any human can relate.

Much more horror in its approach is The Terminator. This is the classic monster movie, a cyborg that ‘…absolutely will not stop ever, until you are dead’. And here again, the shift is huge from a static computer interface to the walking and talking Arnie as, ‘living tissue over a metal endoskeleton’. The original Alien also taps into the idea of an evil machine (or at least one tied to the evil plans of man). Subsequent Alien films use the idea of Asimov’s inbuilt robotic laws*, which prevent robots from harming humans. I Robot explores this further when a central AI computer calculates that humans are on a course which will lead to their extinction; because of the robotic laws, it can’t allow that and tries to enslave all humans to protect them from themselves.

Now, the idea of such sophisticated technology doesn’t seem so far-fetched. And AI in fiction continues to evolve, with shows such as Humans and the recent film, Ex Machina, presenting far more complex pictures of how robots might develop as individuals. Even the sequels to The Terminator move away from absolutes and adopt a morally ambiguous stance.

When I began to think about the issues surrounding the creation of an AI character, it seemed that the old problems of emotion and humour would still be the most difficult to replicate. I didn’t want to implant memories, as that had been done before, so I added an element of fantasy to get around the issue of emotion, but I decided that a lack of humour could be used as a character trait. And in the end, I liked the idea of my creation having free will – at least to the extent that any of us have it.

*Isaac Asimov’s Three Laws of Robotics
1.  A robot may not injure a human being, or, through inaction, allow a human being to come to harm.
2.  A robot must obey the orders given it by human beings except where such orders would conflict with the First Law.


3.  A robot must protect its own existence as long as such protection does not conflict with the First or Second Law.

Thanks so much, Joanna, for having me over on your blog.

It's a great pleasure, Shirley. Wishing Skyjacked the success it deserves - I can certainly highly recommend it!